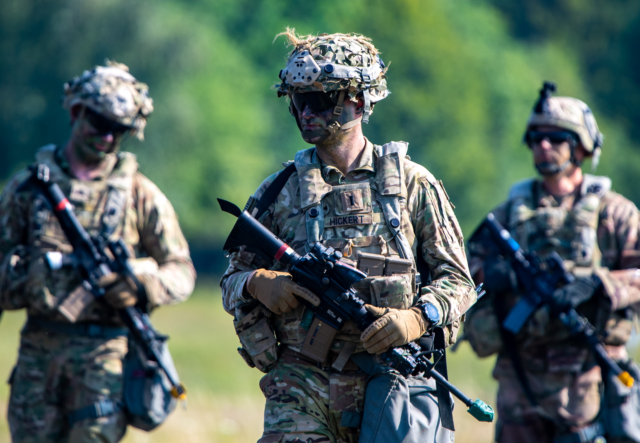 American armed forces have begun training Ukrainian soldiers to use advanced weapons systems in Germany, the Pentagon revealed on Friday.

In a Washington press briefing, Pentagon Press Secretary John F. Kirby said that the United States had come to an agreement with Germany to begin training programmes for Ukrainian soldiers.

The Florida National Guard has been tasked with the “bulk” of the training, which will show a group of Ukrainian troops how to use advanced weapons such as howitzers, radar systems, and armoured vehicles.

“Today, I can announce that the United States has commenced training with the Ukrainian Armed Forces on key systems at U.S. military installations in Germany. Now, these efforts build on the initial artillery training that Ukraine’s forces already have received elsewhere, and also includes training on the radar systems and armoured vehicles that have been recently announced as part of security assistance packages,” Kirby said.

“This new training effort in Germany and at other locations in Europe is in direct support of recent U.S. security assistance packages that are designed to help Ukraine win their battles today and build strength for tomorrow. These new systems and the associated training… will strengthen Ukraine’s ability to counter Russia’s renewed offensive in Eastern Ukraine,” the Pentagon spokesman continued.

This week, President Joe Biden called on Congress to approve a further round of military aid to be sent to Ukraine, requesting another $33 billion on top of the $13.6 billion sent to the Eastern European nation in March.

“Basically, we’re out of money,” the President said.

Mr Biden previously drew controversy over remarks to U.S. soldiers in Poland suggesting that they would be entering the field of battle in Ukraine.

“You’re going to see, when you’re there, and some of you have been there, you’re going to see women, young people, standing in front of a damn tank,” Biden said during a March visit with the 82nd Airborne Division stationed in the Polish city of Rzeszow.

The 79-year-old Democrat later tried to say that he was merely talking about American troops training Ukrainians in Poland. However, the White House was forced to walk back this as well, as it would have been seen as a major escalation in what has become a proxy war between Western powers and the Russian Federation.

On Friday, the top Pentagon spokesman said that U.S. troops are currently training Ukrainian forces in “roughly three locations” but would only confirm the German site as he claimed he was “not at liberty” to disclose the other training locations.

The announcement from Kirby comes as German lawmakers approved a measure to send “heavy weapons and complex systems” to Ukraine, after previously showing reticence to send significant arms to the country, with many pointing to Germany’s heavy reliance on Russian energy for its hesitancy to appear involved in the war.

In 2020, former U.S. President Donald Trump had attempted to conduct a drawdown of American troops on the ground in Germany — a holdover from the Second World War and subsequent Cold War — over the country’s consistent failure to meet its NATO spending while sending billions to Moscow for Russian gas.

However, upon assuming control of the White House, President Joe Biden reversed the troop reduction, and instead actually decided to bolster America’s military footprint in Germany, sending an additional 7,000 soldiers to the leading European Union member-state in February.