‘Are You Using This Crisis To Take Us Into Socialism?’: Maria Bartiromo Confronts New York City Mayor 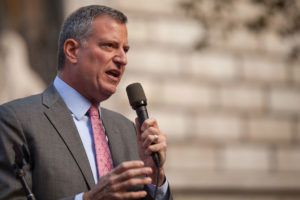 The Fox News host picked apart the New York Mayor’s words and asked if the crisis was being used to take us into socialism. A question that many of us have been thinking lately.

During the interview, Mayor Bill de Blasio said New York City would need the support of the federal government to make it through the pandemic. Specifically stating that New York City needs a $7.4-billion paycheck.

In the interview, Blasio said: “There’s no question in my mind, we must have the support of the federal government to do this, because, right now, to be able to have a strong economy again and really restart, we have to be able to provide the basic services that have made this place work, police, fire, sanitation, health care, education.”

On the surface, it doesn’t seem unreasonable. New York City has lost nearly $10-billion in taxes and in new expenditure tackling the COVID-19 pandemic.

If it means New York City can get back to work, it makes sense for the government to bail them out. Especially a global powerhouse like New York City. The Mayor even aptly compared his city’s situation to how the government is bailing out the airline industry.

CHECK OUT: Doctors say one of the effects of the lockdown will be weaker immune systems.

“Take Us Into Socialism“

However, Fox host Mario Bartiromo pulled no punches and asked: “Are you using this crisis to take us into socialism?”

It wasn’t a question without foundation. The host had seen Mayor do Blasio in a previous press conference saying: ‘The bigger picture, a fair recovery for all, confront structural, economic and racial inequalities.’”

It’s an ambiguous comment. It’s uncertain whether it’s a statement reflecting on the current data saying that black people are dying at more than double the rate of other ethnicities, or some larger socialist plan.

Bartiromo continued: “Are you looking to change things that have nothing to do with the coronavirus and were not impacted by that, Mr. Mayor?”

The Mayor had nowhere to go. He replied: “Maria, I’m looking to go at the very things that the coronavirus has dredged up. There are vast health care disparities that have come up that must be addressed for the good of all of us. It’s the right thing to do, but also to have a strong, healthy society.”

It sounds on the surface like Blasio is talking about the data regarding black people’s death rates. It’s a serious issue but not one to be tackled with federal government bailouts.

Understanding the virus, specifically why it does what it does, should have its own deep pot of funding and in this era, it’s impossible to imagine that there aren’t already countless scientists researching this critical concern.

CHECK OUT: The states that’ll face the biggest housing problems if lockdown continues.

The issue here is that the Mayor wants federal money for police, fire, sanitation, health care, and education but has additional, less transparent goals it seems.

It’s reminiscent of how Harvard took small business relief funds from the Paycheck Protection Program and planned to bail out students with it, despite that not being its purpose.

It will be interesting to see how the $7.4-billion is split between keeping essential services at optimum and addressing health care disparities because it’s inevitable, New York City will get the money. Too much is riding on it. Without it, New York City is unlikely to restart its economy and that’ll have knock-on effects nationwide.

In the interview with Fox, Mayor de Blasio said: “If we’re not whole, if New York City is not whole, it will drag down the entire region, and it will hold up the entire national economic restart.”

What’ll make New York City whole? $7.4-billion of course. To some it may seem like a hostage situation, to others, it’s just politics.

CHECK OUT: China’s Communist Party is outraged that other nations are joining America in blaming them.