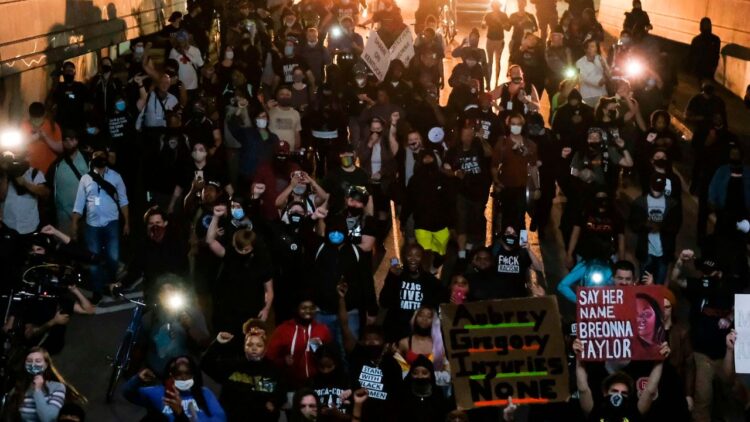 There were several protests in American cities on Saturday, which was the one-year anniversary of Breonna Taylor’s death. Some of the peaceful protests escalated into unrest and violence. POLL: What scares you the most? about:blank

In Louisville, crowds gathered to call for justice for Taylor, who was shot and killed by a Louisville Metro Police Department officer when a raid turned deadly after her boyfriend Kenneth Walker exchanged gunfire in the early hours of March 13, 2020. The LMPD declared an unlawful assembly after protesters were “blocking the roadway and forcing vehicles, while armed, to turn around.

While the protests in Louisville were peaceful, the same can not be said for Seattle, Portland, and Los Angeles.

Photojournalist Brendan Gutenschwager shared a video of protesters telling police officers to “jump” off a skyway over a road in Seattle, where there were reported to be 100 black bloc agitators. A Starbucks was spray-painted with graffiti and windows were smashed by the mob. The Seattle Police Department said they made 13 arrests, including one for assault on an officer.

In Portland, where unrest has happened regularly for months, there were several acts of violence on Saturday night. Protesters marched towards the Mark O. Hatfield U.S. Courthouse, which is where rioters set fires on Thursday. Vandals spray-painted “police are murderers” on the federal courthouse. Rioters attempted to knock down the plywood boards protecting the courthouse in video provided by KOIN-TV reporter Jennifer Dowling.

In Los Angeles, several storefronts were destroyed by violent rioters.

Many of the protesters in L.A. were seen wielding black shields with white fists painted on them, and some were waving Antifa flags.

“Breonna Taylor’s death was a tragedy, a blow to her family, her community, and America,” Biden wrote. “As we continue to mourn her, we must press ahead to pass meaningful police reform in Congress. I remain committed to signing a landmark reform bill into law.”

Biden called Antifa an “idea” during the 2020 presidential debate in September.