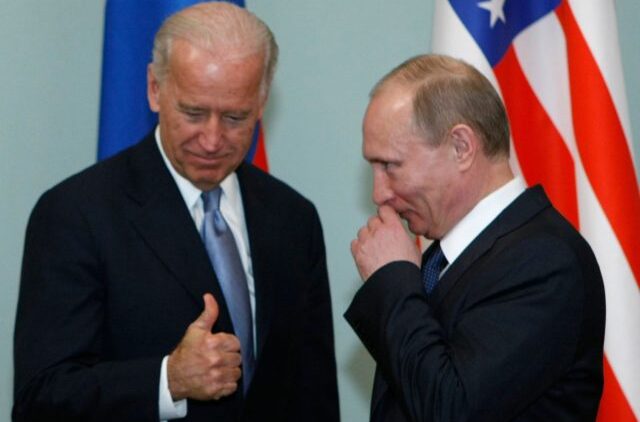 he Kremlin announced Thursday that Russian President Vladimir Putin will not move forward on an offer from U.S. President Joe Biden to meet in person, at least for the time being, Russian state media outlet RT reported.

Government spokesman Dmitry Peskov cited logistical issues as the main reason for rejecting the White House’s offer to meet “in a third country in the coming months.”

“No, a bilateral meeting of course cannot be organized that quickly,” he asserted.

In March, Putin challenged Biden to a one-on-one online debate after the American leader called him a “killer” and warned Russia would “pay a price” for its international shenanigans, without elaborating.

“I want to propose to President Biden to continue our discussion, but on the condition that we do it basically live, as it’s called,” Putin said. “Without any delays and directly in an open, direct discussion. It seems to me that would be interesting for the people of Russia and for the people of the United States.”

“We could do it tomorrow or Monday. We are ready at any time convenient for the American side,” Putin suggested.
Biden declined to debate Putin.

Biden’s offer reportedly came during a Tuesday phone call that Peskov described as “businesslike” in which Biden allegedly expressed “concern” over Russia’s growing military presence on the Ukrainian border and did not discuss the ongoing political imprisonment of dissident Alexei Navalny, which activists consider one of Russia’s most pressing ongoing human rights violations.

Biden also reportedly discussed his overture to Putin in agreeing to extend the New START nuclear weapons agreement by five years; Moscow had unsuccessfully urged the Trump administration to extend it by just one.

The White House said “President Biden emphasized the United States’ unwavering commitment to Ukraine’s sovereignty and territorial integrity” during the call and that he “voiced our concerns over the sudden Russian military build-up in occupied Crimea and on Ukraine’s borders, and called on Russia to de-escalate tensions.”

Tensions between Russia and Ukraine, though generally high since the 2014 Russian annexation of Crimea, have flared in recent weeks, with Ukrainian President Volodymyr Zelensky openly foreshadowing a Ukrainian push to retake the peninsula and touting alleged international support for such an operation. Russia, for its part, has launched a significant military buildup on its border with Ukraine near the contested region of Donbass, currently under the control of Russian separatists for whom Russia insists it has not lent any support.

Peskov declined to discuss reports that the White House was preparing to expel Russian diplomats and impose new sanctions on the country, saying “for now, we will not be commenting on newspaper reports, and we will be waiting to see if any specific decisions are announced officially.”

Those reports materialized later on Thursday morning with the Biden administration announcing the expulsion of ten diplomats in the U.S. as well as sanctions against the Russian regime and many of its intelligence officials. The move marks the first retaliatory measures by the U.S. over hacking operations and Russia’s alleged assistance to former President Donald Trump’s election campaign.

At the press conference, Peskov preemptively condemned any U.S. sanctions and hinted that Russia would respond in kind, saying “we condemn any such measures — we consider them illegal — and, in any case, the principle of reciprocity applies here. Reciprocity that allows us to best ensure our own interests are being met.”

As of press time, the Kremlin has not announced any reciprocal actions in response to U.S. sanctions.