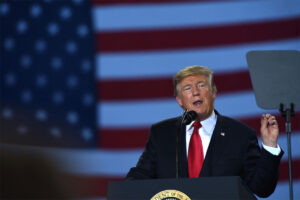 During the 2020 election, the biggest voter issue will likely be America’s economic recovery and who is most suitable to lead the nation in its comeback from the pandemic.

According to a Morning Consult survey, President Trump came out on top in a head-to-head with Joe Biden in regard to who the nation trusted with its economic recovery.

However, that was one of only three areas the President came out on top against Barrack Obama’s former Vice President.

CHECK OUT: Democrat strategist goes on a podcast and says “Biden will beat the President’s fat *ss” in 2020 election, plus the podcast’s host compares Trump to Hitler and Putin.

Another Day Another Poll

The survey was done between May 15-18 and included 1,994 registered voters. From those involved 43-percent backed President Trump for economic recovery after the pandemic versus 40-percent who backed Joe Biden.

The other two areas where President Trump came out on top against Biden included the economy in general, 44-percent to 41-percent, and in job creation, 44-percent to 40-percent.

In the notes of the survey, Morning Consult wrote the following: “If the virus appears relatively under control by the fall and voters are more focused on rebuilding the economy, those conditions could be more favorable for Trump.”

Considering the speed at which states are reopening, and if they don’t need to lock down again because of new spikes in COVID-19 infections, in theory, all states could be reopened long before the 2020 election. This could put President Trump in a better position than what most polls are showcasing currently.

CHECK OUT: Joe Biden says young black American isn’t black because he doesn’t know who he is voting for.

In a Reuters poll, Republicans and independents put the economy as their biggest issue, and it is obvious why. Especially as unemployment has hit a staggering 38.6 million since lockdowns first came into effect.

Yet, it is outside of the economy where President Trump seems to be struggling in polls. For instance, the Reuters poll, which asked people who they would vote for right now put Joe Biden on top.

The reality is, despite the severity of the economy, some voters put other issues first, and in the Morning Consult survey, Joe Biden may have lost to the President regarding the economy, but he beat the President in four out of eight categories.

The President and Biden drew in how much they’re trusted when it comes to national security, 42-percent to 42-percent.

One thing is certain, there will be many more polls and surveys like this between now and the 2020 election in November. The big question, will any be right this time?

CHECK OUT: Reuters Poll Says If 2020 Election Was Today Biden Would Win.