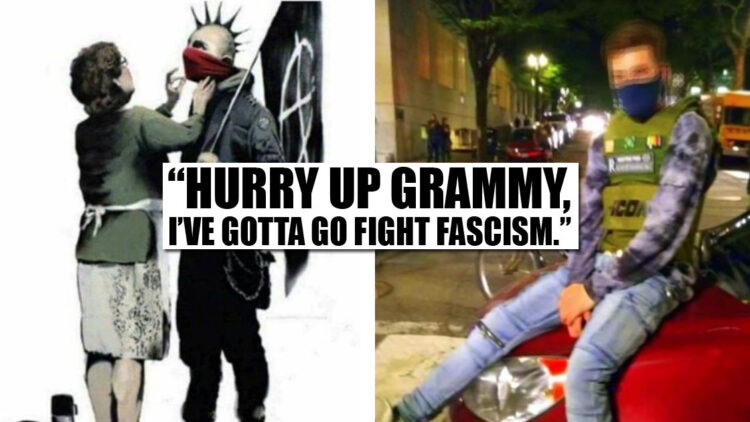 A Portland IED throwing anarchist who targeted the federal courthouse has been identified by his riot vest, which was lovingly purchased by his grandmother from Hibbett.com.

Whether this is an online prank or serious we’re not sure but it is one sequence of events that we cannot ignore.

Lets begin at the end.

Exhibit A: The Vest Review

Internet detectives used footage from the Portland riots and followed it back to a review on Hibbett.com by the anarchist’s grandmother.

In the review, she wrote: “I got this for my grandson who’s a protester downtown, he uses it every night and says it does the job.”

She gives it five stars and leaves a lovely picture. See if for yourself below:

According to the internet detectives at 4chan, they tracked down the Antifa anarchist through his expensive clothing. Probably why AOC told protesters to stay hidden in her bizarre, anarchy supporting Instagram post.

In the videos where the IED throwing anarchist attacks the federal courthouse in Portland, internet detectives picked out his white Air Jordans and other designer clothes and the vest.

It’s ironic, considering the peaceful protests are allegedly about oppression and yet he’s supporting that with expensive clothing likely made by slave labor in other countries.

The picture, review, and video clips have amazingly connected this IED throwing anarchist to his grandmother. If true, this sequence of events could and should end up with the grandson being charged.

Watch some of the video evidence below.

CHECK OUT: Watch Portland Mayor Ted Wheeler gets saved by his security team after walking with rioters.

There’s nothing funny about an IED throwing anarchist, it’s violent and a very serious act. However, the manner in which his identity has been uncovered is nothing short of astounding and hilarious.

One Twitter user commented: “This was my response when my wife asked why I was laughing so hard I said, can you think of anything more Oregon than this?”

Another user commented: “Riot Gear for birthday from Gammy.”

And finally: “Aaannd this is the problem. Gramma is literally proud of purchasing him riot gear & how he looks in it. This kid never had a chance in society.”

The best is below:

CHECK OUT: Watch the riots in Portland and Seattle. They’re organized and attacking specific buildings. Proving once and for all, it is domestic terrorism.