Watch: Joe Biden Gets Lost After Struggling Through Speech in Jerusalem 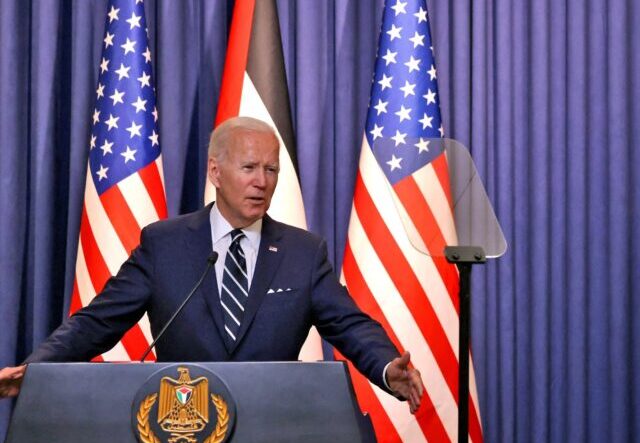 President Joe Biden appeared to lose his way after delivering a speech Friday at a hospital in eastern Jerusalem.

The president grew emotional as he began recounting his time in hospitals, recalling when his first wife was killed in a car crash, when he underwent two surgeries for brain aneurysms, and also suffered an embolism.

As he told the story, the president grew hoarse began coughing, and reached for his water.

“Sorry. I swallowed wrong,” he said, pausing to take a drink.C-SPAN0 seconds of 1 minute, 3 secondsVolume 90%

Biden recalled during his brain surgeries when he was lying in the intensive care unit staring at the monitors.

“You just get tired, even when you’re not in pain, you just want to quit,” he said.

He praised the nurses in the hospital for making him want to live.

“The nurses at Walter Reed hospital would come up, they’d rub my face, they’d whisper in my ear, they get close and tell me it’s going to be ok,” he said. “They made a difference in my life.”

Biden shifted to speaking about his deceased son Beau Biden.

He began meandering about how his son slept about 150 yards from a burn pit when he was stationed in Iraq and came home with stage four glioblastoma.

“He should be the man standing here talking to you as president, not me,” he said.

Biden, clearly off script began talking about his “moonshot” effort to find a way to cure cancer, forgetting words as he tried to explain what he was trying to do.

Biden went back on script but indicated he had more to say about the importance of nurses and hospitals.

“I could say much more, but if my mother were here she’d look at me and say ‘Hush up, you’ve spoken too long,’” he said wryly.

As he wrapped up his speech, Biden paused and took a question from a woman in the audience.

“If you have a question about hospitals I’ll answer it, if you don’t I’ll do it privately,” he said.

The woman commented about voting for Biden and called for “more justice and more dignity” in Palestine.

The president reacted by ending his remarks.

“Thank you. Thank you, folks. Appreciate it very very much. Thank you,” he said.

After leaving the podium, Biden paused and motioned to his security team, apparently uncertain of which way he was expected to leave the room.