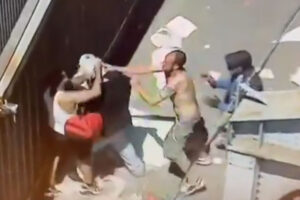 The streets of America look like scenes from a dystopian movie. From billowing smoke to wild looting, it’s chaos. It has gotten so bad that even the looters are looting each other.

WARNING: The video below shows a person being attacked.

HOW THE LEFT SEE IT: The last day of May in The City of Brotherly Love, two looters, after a hard day plundering in the name of George Floyd stop to help another looter with his goods. Oh dear, one falls over. Accidents will happen.

Where’s the police? The National Guard? Anyone?

The peaceful protests have become part of the problem. They suck up all of the police force, taking them to specific areas and leaving citizens and businesses elsewhere vulnerable to criminals like these.

Philadelphia police reported 215 arrests as of Sunday, and the city is under a nightly curfew. Yet, peaceful protests continue giving opportunities to those who only want carnage.

CHECK OUT: Looter admits the truth, he’s doing it for the money and not about George Floyd.

WARNING: The video below shows a person being attacked by a mob.

A few weeks ago, business owners across the nation were concerned about surviving the lockdown, now they need to survive looters. America has clearly returned to being the Wild West and until all protests stop, rioters and looters will continue to cause havoc across the United States.

CHECK OUT: AOC supports the rioters and gives them tips to keep identities secret and hands protected from things that may cause serious harm.