WATCH: Mayor Ted Wheeler Gets Saved From Mob By Security 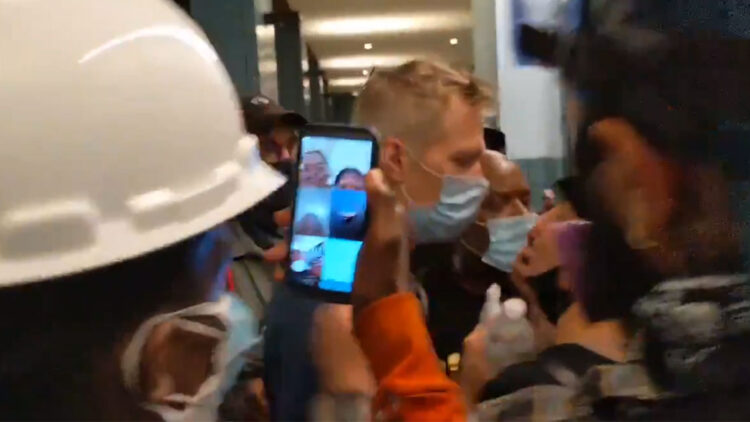 Portland Mayor Ted Wheeler has continuously spouted liberal nonsense, backing the chaos as his city collapses into anarchy. Yet, despite his best efforts to be one of the cool kids, he still needs security.

The streets have been pounded by “peaceful protesters” for over 50-days now and Mayor Ted Wheeler has been nothing but supportive. Even standing against the federal forces who are trying to protect innocent people, businesses, and property.

So it’s wonderfully ironic that despite all his appeasement, in this video, we get to see how safe he really is amongst the mob. A mob he is happy for everyday citizens of Portland to suffer.

Just Watch below as his security detail save him in the doorway.

CHECK OUT: Congresswoman talks up a President Trump conspiracy. Saying that federal forces are in Democrat-led cities for a coup if he loses the 2020 election.

This walk had nothing to do with reality, but rather a political stunt. An attempt to grab some headlines so he can point the finger at President Trump’s federal officers.

Mayor Ted Wheeler’s first comment about his stroll read: “What I saw last night was powerful in many ways. I listened, heard, and stood with protesters. And I saw what it means when the federal government unleashes paramilitary forces against its own people.”

It was definitely powerful at the door when security had to step in to save him. If only every citizen of Portland had five trained security officers to help them get through the streets…

Wheeler continued: “It is unconscionable and un-American. We are all committed to change – this must stop so the work can move forward.”

Clearly, Mayor Ted Wheeler believed he could leave Portland under the rule of anarchists for several weeks without a federal reaction.

Fortunately, most people don’t think that way, and now Portland has federal officers on the scene trying to stop the city being set ablaze, like the courthouse.

One person wrote about Mayor Ted Wheeler’s video: “Remarkable that one of the most extreme socialists Mayors in America needs protection from his leftist citizens. These images are going to haunt the Democrats in November.”

Let’s hope these images do have an impact in November because right now the mainstream media is keeping most of the Democrat-led madness hidden.

CHECK OUT: The riots in Portland and Seattle continue with organized attacks on buildings.