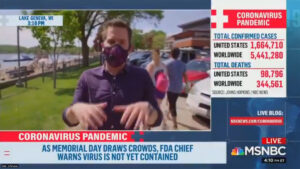 If you ever need proof of media hypocrisy consider these videos exhibit A and B. To our face, they push COVID-19 fear relentlessly, yet off-camera they clearly don’t practice what they preach.

Eddie Zipperer, who is an opinion contributor at the Daily Caller and a host on the Politics for Patriots podcast posted to Twitter video proof of the double-standards the American people suffer under.

In the video, the MSNBC anchor asks the reporter, Cal Perry, who is in Wisconsin: “Are the people there just not worried about it? Are they not worried about their personal safety?” The reporter replies: “I haven’t met anybody who is… you can see here, nobody’s wearing them (masks).”

At this point the camera is looking at a passerby who is filming the crew and reporter. The passerby instantly responds to the reporter’s comments: “Including the Cameraman.”

The reporter than acknowledges the fact his Cameraman isn’t wearing a mask, before MSNBC go back to the anchor. It’s priceless.

Amazingly, the passerby who was recording and responded also tweeted their footage. Adding that Cal Perry touched the Cameraman, they weren’t social distancing, that he was touching his face, plus there seems to be another crew member without a mask.