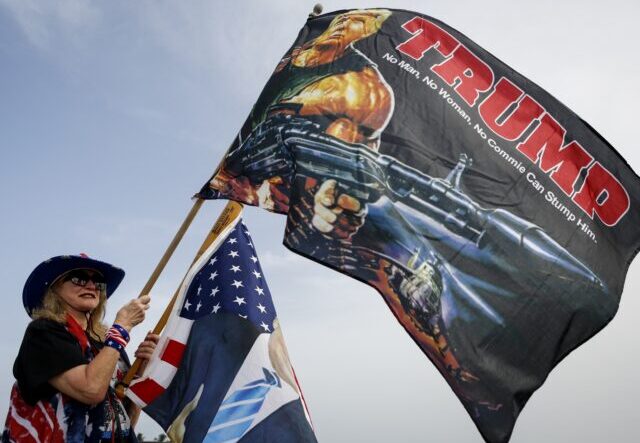 Supporters of former US President Donald Trump outside Mar-A-Lago in Palm Beach, Florida, US, on Tuesday, Aug. 9, 2022. Donald Trump faces intensifying legal and political pressure after FBI agents searched his Florida home in a probe of whether he took classified documents from the White House when he left office, casting a shadow on his possible run for the presidency in 2024. Photographer: Eva Marie Uzcategui/Bloomberg

“We would ask Americans to remain peaceful in this time,” White House press secretary Karine Jean-Pierre said during the daily briefing when asked about angry Trump supporters.

Establishment media reports have raised fears about enraged Trump supporters declaring “war” on the “deep state” after the raid on the former president’s home, raising the alarm that they are preparing for political violence or even a second civil war.

But the White House made it clear President Joe Biden sternly opposed any violence.

“There is no place for political violence in this country,” Jean-Pierre said. “People have the right to raise their voices peacefully, but we would strongly condemn, as we have many times from here, the president has condemned, any efforts to plan violent behavior of any kind.”

A crowd of Trump supporters reacted to the FBI raid by rallying in front of the former president’s home in Florida to show their support.

Jean-Pierre refused to address details of the FBI raid, insisting that President Biden had no prior knowledge of the incident and learned about it through the news media.

She also ignored questions about Biden’s federal law enforcement invading the home of a potential rival in the 2024 election, appearing to be a politically motivated prosecution.

“It would not be appropriate for us to comment on any ongoing investigations,” she said.

The Department of Justice and the FBI have not released any statements about the raid or revealed why they felt it necessary to execute a search warrant on the former president’s home.