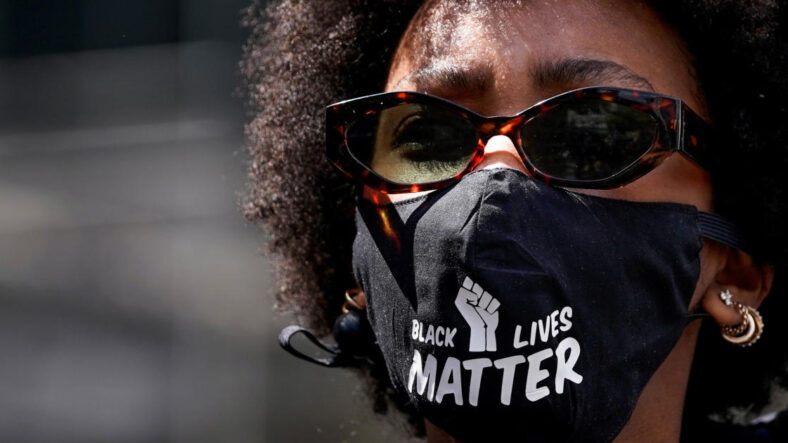 A protester wears a protective face mask on which is written 'Black Lives Matter', during an anti-racism protest, in Brussels, on June 7, 2020, as part of a weekend of 'Black Lives Matter' worldwide protests against racism and police brutality in the wake of the death of George Floyd, an unarmed black man killed while apprehended by police in Minneapolis, US. (Photo by Kenzo TRIBOUILLARD / AFP) (Photo by KENZO TRIBOUILLARD/AFP via Getty Images)

Whole Foods says that it has the constitutional right to ban its employees from wearing “Black Lives Matter” masks while on the job, Bloombergreports.

The business says that a federal labor board will effectively violate the First Amendment if it attempts to force the company to allow the polarizing message on employee masks.

National Labor Relations Board general counsel Jennifer Abruzzo filed a complaint in November that the company infringed on federal law by enforcing a workplace dress code that banned “Black Lives Matter” masks. The board’s complaint alleged that the company illegally prevented several of its employees from displaying “Black Lives Matter” logos on masks and apparel and punished those who flouted the company-wide regulation.
Recommended VideosPowered by AnyClipPelosi Rambles Incoherently About Jan 6th While the Internet ERUPTS127.7K47Play Video

MTG Calls Dems “Communists” to Their Face and Internet EXPLODES

Ron DeSantis NUKES AOC for Vacationing in Florida After Trashing Them

The complaint, according to reports, alleged that Whole Foods prevented its employees from engaging in “concerted activities for their mutual aid and protection.”

In a Dec. 17 filing, Whole Foods stated that National Labor Relations Board general counsel Jennifer Abruzzo attempted to “compel” speech, violating the First Amendment and “unlawfully infringing upon and/or diluting [Whole Foods’] protected trademarks” by attempting to force the company to permit political messages through its uniforms. Don’t miss out on content from Dave Rubin free of big tech censorship. Listen to The Rubin Report now.

The company argued in its filing that the National Labor Relations Act does not offer protection for “political and/or social justice speech.”

“Whole Foods contends that Section 7 of the NLRA, which protects employees’ right to take collective action related to working conditions, doesn’t extend to workers’ BLM messages, which it calls ‘political and/or social justice speech,'” Bloomberg’s report added. “The company’s filing argues that ‘BLM’ and related phrases ‘are not objectively understood to relate to workplace issues or improving working conditions at WFM’s retail grocery stores’ or employment terms and conditions in general.

“Employees do not have a protected right under Section 7 of the Act to display the phrase ‘Black Lives Matter’ or ‘BLM’ in the workplace,” the company’s attorneys wrote in the filing.

The complaint and response are set for a March trial.

A spokesperson for the Amazon-owned chain grocery store told the New York Post that the company dress code “bans any visible slogans or logos that aren’t company-related and does not single out the ‘Black Lives Matter’ movement.”

“Our dress code policy is designed to ensure we are giving Team Members a workplace and customers a shopping experience focused entirely on excellent service and high-quality food,” the spokesperson said in the company’s statement. “We do not believe we should compromise that experience by introducing any messages on uniforms, regardless of the content, that shift the focus away from our mission.”

A spokesperson for the National Labor Relations Act did not respond to the Post’s request for comment.